A man named Árni from Skeiður set off from Selárdalur to hunt a fox at the Gammur cliff, which stands on the shore in the Krossavík inlet, a bow-shaped bay containing a cave in which men can become trapped at high tide. He lay in wait for the fox fairly high up the shore, with a band of seaweed lying between him and the waterline. A bright moon shone in the sky, but it was half dark in between. The weather was warm and calm, with a light breeze.

As the night wore on, Árni noticed something that seemed to be alive emerge from the sea. As the surrounding water rose up, it took on the form of some kind of creature that looked to be shaped like a trunk, but broadening out towards its base. When the creature came ashore, it appeared to be the height of a tall man, but the breadth of its lower torso made it appear cone-shaped. Nothing else, including a head, could be seen on its body, but it was very dark in colour. Its crotch was short and its legs thick, with claws like a frog’s on its feet. No front legs or other appendages could be seen.

The creature headed straight for Árni, its movements slow and sinuous. Before it had reached the band of seaweed, Árni decided not to wait any longer and fired off a shot from his gun aimed at its middle. It didn’t fall, but turned round and headed back towards the sea a much faster pace than it had come ashore. Diving beneath the waves, it then disappeared. Árni said little of his experience to others, because no one believed him and dismissed his tale as superstitious drivel. 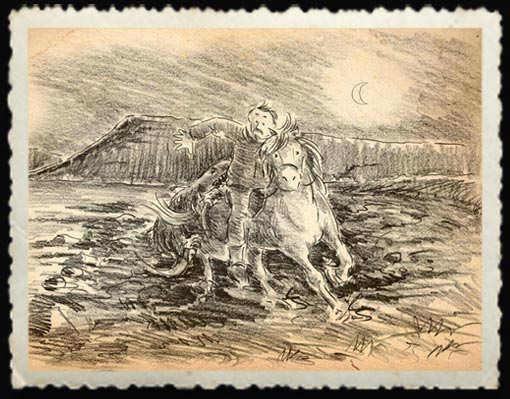 A man riding home along the shore from church at Otradalskirkja late one evening accidently ran his horse over a monster which lay on the beach.The creature gave chase and slashed the horse’s back causing a deep gash. It also ripped the man’s back with its claws, causing two sets of triple wounds. At last, the creature gave up and disappeared, leaving the man lying for some time nursing his wounds. His horse had to be put down.

Boat runs aground on a monster

In 1915, a six-oared fishing boat named Heppinn (Lucky) set out from Kirkjuból, in the Fífustaðadalur valley, skippered by Benedikt Kristjánsson, who served for several years as district administrator in Ketildalir. As they were returning to shore in fine weather and calm conditions, the boat suddenly ground to a halt and appeared to have run aground, although it was in the open sea. It was stuck on the back of something that seemed to be a giant beast or strange creature with a massive tail that thrashed around from time to time in the surrounding water. Suddenly, a minke whale sped alongside the vessel. Coming so close that it almost broke the oars, it pushed the monster below the surface, so that the boat floated free and the crew managed to row ashore unharmed and in one piece.

At the turn of the 20th century, an English trawler named the Royal Dunn was fishing in the area off Fífusstaðir, when its trawl became so heavy as it was being hauled in that it almost overturned the boat.As the net came up the side, it became clear that it had caught a huge, terrible monster. Some of the crew tried to cut a hole in the trawl, while others sprayed scalding steam on the creature, which spewed an unidentifiable liquid onto them, burning each of them badly. The monster completely filled the net, and witnesses estimated its size at a ton in weight and ten metres in length, not counting its tail.

Black in colour, it had a thick coating of seaweed and shells, and its head stood at the end of a long neck, but was fairly small. Its eyes were large and protruding, and each of its feet had three toes and a heel, with a sharp claw on each. From time to time, the beast let out a roar like a bull, in between which it spewed its poison at the crew, who finally managed to cut the net and sail as fast as they could to Bíldudalur. Thorbjörn Thórðarson, then the local doctor, did what he could to treat their injuries, but they all turned out to be badly burned.

In 1883, Gísli Jónsson from Skeiður in Selárdalur was stalking a fox under the cliff named Gammur, which stands at the entrance to a sandy bay with a large skerry at its mouth.

When he had lain there awhile, he noticed what appeared to be a large creature moving along the sand that looked like no other land animal he had ever seen. As it approached, he dared not move but was ready with his gun. Passing at a distance of less than eight metres, the beast didn’t even glance in his direction.

According to Gísli’s description, the monster was so tall that a horse could have passed beneath its belly. It had four legs with hooves, a massive head, and a tail with a hairy tuft at the end. The length of two horses, it was extremely stout, covered in seaweed and powerfully built, with large, thick legs. It seemed to have no knee joint, and groaned deeply when it stumbled on a stone.

When the monster disappeared behind the cliff, Gísli went down to the shore and saw the footprints it had left behind, which were so deep that they reached up to his knee in the sand. He could also see the trail left by the seaweed that grew on it.

A man named Gísli who lived in Arnarfjörður constructed a hide on the shore in Fífustaðadalur and lay in wait there one night with his gun to hunt a fox. The hide had a door and a small gun port. Conditions were fine and clear, and the moon was bright. As the night wore on with no sign of the fox, Gísli became increasingly bored and prepared to leave the hide. As he opened the door and stuck out his head, he saw a square-shaped pile on the sand at the edge of the shore. At first he thought it was an upturned boat, but couldn’t be sure because of the distance.

Soon the pile began to move, however, and at a faster speed than anything he had ever seen in his life. It was as though the creature didn’t touch the ground, and as it sped along the shore towards him, he slammed the door shut and stared through the gun port.

Huffing and puffing, the beast stopped dead at the hide, and Gísli realised that the horrific looking creature was a sea monster. As this terrible realisation dawned, he became so terrified that he could move neither leg nor muscle, but only stare in horrified fascination at the creature before him.

The monster was so big that it reached the length and height of two horses. Even more terrifying was its head, with massive jaws that could clearly easily swallow a man whole. Worst of all, however, was the stench of its filthy breath, which almost made Gísli pass out in disgust.

What seemed an eternity passed as the monster sniffed around the hide, but when Gísli had almost given up all hope, it suddenly turned away and ran straight back into the sea with a giant splash that engulfed the entire shoreline on both sides.

When Gísli had recovered some time later, he got ready to set out for home, but was in such a state of terror that he did not trust himself to walk along the shore, but climbed up the hill behind as high as he could.  The following day, he brought two other local farmers with him to the scene, and they could still clearly see the creature’s hoof prints running from the waterline up to the hide, each as big as a trapdoor with six toes on each foot.

It took Gísli a long time to recover from his experience. He had shared the hide with another man, but he never witnessed anything unusual.

Search for Monsters and Mermaids